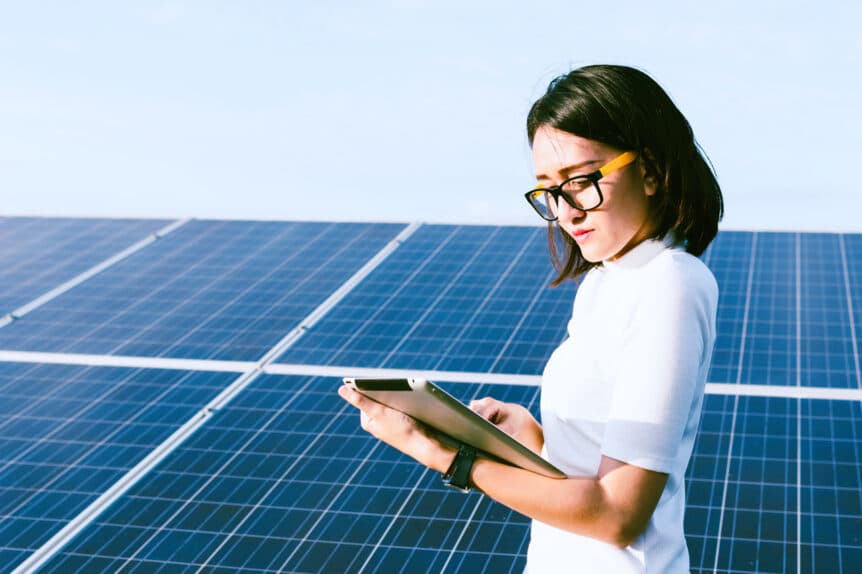 The ongoing significant technical advances in solar cells and solar panels over the recent decades have been a key driver in the transformation of solar power into a major source of renewable energy, and a serious alternative to traditionally generated electricity. There are now a distinct set of advantages and disadvantages to using solar cells and solar panels as part of a clean-tech energy generating solution, and these are spelled out in this article. However, the advantages for solar energy easily outweigh the disadvantages in the clear majority of cases.

The Disadvantages of Solar Cells and Solar Panels

By starting with the disadvantages, we can address them up front, in the spirit of transparency.

A natural consequence of this is that solar cells and solar panels cannot generate electricity at night. By the same token, their effectiveness will be diminished by any obstructions on their surface, such as dirt, snow or even being overshadowed by a nearby object blocking the sun’s rays. The solution to the daylight issue (or indeed, the variation between periods of bright, direct sunlight and cloudy skies) is to include storage batteries as part of the solar power installation. This enables the solar power system to store all power generated by the solar cells and solar panels to be stored in the on-site batteries for later use – including at night and other times when sunlight is absent or in short supply.

As for the issue of performance being dampened by obstructions, this is overcome by:

The response to this is effectively the same as per the direct sunlight requirement above.

Every power generating system has limits on its efficiency, for a variety of reasons (limitations due to materials, natural leakage between systems components, environmental factors etc.). That said, solar cells and solar panels these days operate at efficiency ratings between 14-22.5%. (The exception is systems built for space missions, whose high costs put them out of range for all but government space agencies and other very high-end applications. Even those solar cells and solar panels have an efficiency upper limit of around 40%.)

Therefore, the focus is on optimizing solar systems to maximize the power generated within these current, well-established parameters.

This is true, although all forms of local, self-reliant renewable energy generation requires an initial investment. It turns out that solar systems present a compelling investment case, and pay back the required initial investment over time. The elapsed time for that payback period varies, of course, depending on the relationship between the amount of the initial investment, the amount of power generated by the new system over time, and the financial returns realized by that generated power, both in terms of savings on electricity costs, and any additional revenue generated from returning power to the local grid.

Inverters convert the electricity generated by the solar panels from direct current (DC) to alternating current (AC) in order to be used in the home or business, and in the public power grid (for any power returned to the grid). Although this can be perceived as an ‘additional’ cost, it really is simply part of the cost of solar power generation. And as explained above, solar power is highly attractive financially, as well as being environmentally clean, renewable and sustainable.

Although true, this statement is not absolute, because space requirements vary, depending on the power desired or required from each solar power system. The rapid growth of solar system installations attests to the ongoing attractiveness of this solution to clean, sustainable and low-cost energy.

Solar systems require on-site batteries, which can be large and heavy, take up space and need to be replaced from time to time

For a continuous supply of electric power, especially for on-grid connections, solar systems do require storage batteries in order to maximize the return on investment by trapping unused power for later use. However, the investment case for solar power is still compelling, and factors in this requirement for storage batteries.

In the spirit of transparency, this is true, mainly because any human transport activity (in this case, transporting solar system components, and indeed, even solar industry workers commuting to their jobs, as is the case for almost every industry) does contribute to planetary pollution. Plus, there are potential pollution risks from materials used in the manufacture of solar panels, as would be the case in virtually all high-tech manufacturing industries.

The Advantages of Solar Panels and Solar Cells

Solar energy is clean, renewable and sustainable, and virtually free after the initial investment

That is correct, solar power is environmentally green energy and virtually free to produce once your system is up and running.

Again, this is true, since you’re generating your own power and therefore only have to pay for the power you consume that is above and beyond what your solar system generates. Some estimates suggest that the average household with a solar system will see 50% of their monthly energy requirements being generated from their solar panels. And most people would see a 50% monthly electricity bill savings as a highly attractive prospect.

This is true, except in cases of sun-tracking mechanical bases, which represent a small minority of current solar systems. As a result of this mechanical systems simplicity, solar systems require very little maintenance or associated costs, and they are very reliable, with many solar cells and solar panels being guaranteed for 25 years.

In this noisy day and age, less noise matters for many of us!

Absolutely. Again, this is a highly attractive feature of solar power.

This is one of the fundamental advantages of solar power, making for a strong financial case in favor.

Solar cells and solar panels have many diverse applications

This is one of the exciting and highly valuable aspects of solar power generation. Solar cells and solar panels lend themselves to many variations in system configurations, for use in both on-grid and off-grid solar power solutions. These range from the familiar (rooftop and ground-based solar installations) to the latest solar panel building facades to versatile city center standalone solar charging stations and portable charging devices to many more.

Not only that, the rate of innovative development in the solar industry is still rapid. This means that solar cells and solar panels, along with the efficiency, versatility and financial returns on solar systems will continue to increase at a brisk pace for some time to come.

Many governments at regional and national level recognize the need and significant value of solar power, and have continued to support it via a variety of financial incentives for businesses and homeowners. These incentives are set to continue for the time being, adding another reason for solar power being a compelling investment on so many levels.