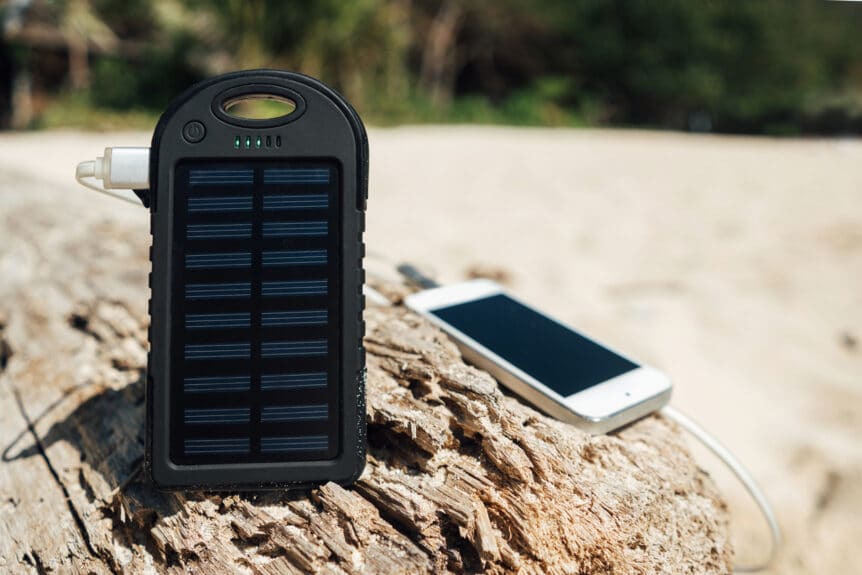 A solar charger was once something only conceivable for use by NASA. Nowadays, they are literally everywhere, as an indispensable accessory for modern living in our ‘always connected’ age. A solar charger can literally make the vital difference between being connected and being cut off when a mobile phone runs out of battery power. Fortunately, the cost and wide variety of solar chargers is now such that they are affordable to most, depending on specifications.

Until self-charging devices become the norm, solar charges are a vital must-have for virtually everybody owning a mobile, and for many who use other modern technology.

What Is A Solar Charger?

A solar charger is a solar panel that provides electricity to charge an associated battery. They are currently typically handheld and therefore portable. However, there are also a growing number of non-portable, standalone solar charger units being installed in cities, for example to provide mobile phone and tablet charging facilities for the public.

How Does A Solar Charger Work?

The solar panel is made up of photovoltaic (PV) cells. In common with all photovoltaic/ PV cells, they contain light-sensitive materials that convert sunlight into small amounts of electrical current. When sunlight shines onto the solar panel, the resulting electricity is sent to the battery, subject to the regulating effects of the charge controller (see below). The sunlight can be direct (for best results), or indirect (less ideal).

A solar charger can recharge lead batteries, NiCad batteries or for best performance, nickel–metal hydride (NiMH) batteries. The battery stores the electricity generated by the solar panel for later use by any electrical devices that are connected to it. This point bears emphasizing: the battery allows for maximum usage of the solar charger in two key respects:

Since the voltage produced by solar panels can vary depending on the amount of sunlight it receives, a charge controller is included with a solar charger to regulate the amount of voltage delivered.

Types of Solar Panels Used In A Solar Charger

Solar charge design and use is influenced by the type of solar panel used. In layman terms, there are essentially three types in common use:

Fixed simply means a normal, rigid solar panel (or group), all in one plane. These can be of any size, and indeed are used in solar energy generating stations.

Folding is really just an application of fixed panels, hinged to enable folding. This is useful to make the unit more portable.

Flexible, as the name suggests, uses a thin film solar panel to enable a far more flexible, even rollable panel. This is particularly useful when attaching to active wear, for example, rucksacks.

The Many Uses for A Solar Charger

Solar charge uses are nearly so widespread as to appear almost limitless. At high level, the most popular solar charger uses include:

Modern society is mostly geared towards an ‘always-on’, 24/7 way of life, with mobile phone ownership now exceeding computer ownership, and covering the planet. As a society, the overall tendency is to be more independent as individuals, yet much more highly connected via our mobiles. However, this is dependent on mobiles being available for use. Before the arrival of solar chargers, it was commonplace for mobile phone owners to find their mobiles running out of power. Unless they could get to a wall socket and wait for their phone to charge, they had to accept that they would simply have to go without the use of their phone.

However, this can pose a worry to friends and family, let alone the phone owner, as the dramatic reduction in public pay phones means that without a mobile, a person can be left without a means of contacting others in case of getting lost or a more serious incident. Sadly, this could pose a serious health or even safety risk.

Even on the less worrying end of the scale, losing charge on a mobile could result in not being able to make travel connections or vital meetings, with potentially non-trivial consequences. The bottom line, therefore, is that keeping a ready level of charge on mobile phones, let alone tablet devices and laptops, can often be vital for business, or far more seriously, for personal safety.

Advantages and Limitations of a Solar Charger

Other Considerations for Solar Chargers

This will vary considerably, depending on the size and specifications of the solar charger, and the nature of the device being charged (each of which will have its own batter technology and energy requirements, both of which play a major factor in recharging time).

Many solar chargers were made initially for the business travel market. While these are robust enough to survive airports, hotel and office use, they are not normally intended for backpacking and other outdoor pursuits. Fortunately, there are now many chargers with far more rugged designs that are geared specifically towards this outdoors market, and even more robust normal use by construction workers, students, and others with these requirements.

Using a Solar Charger at Night

Due to the battery storage associated with a solar charger, that power can be used at night, even when the solar panel is no longer providing electricity to the battery.